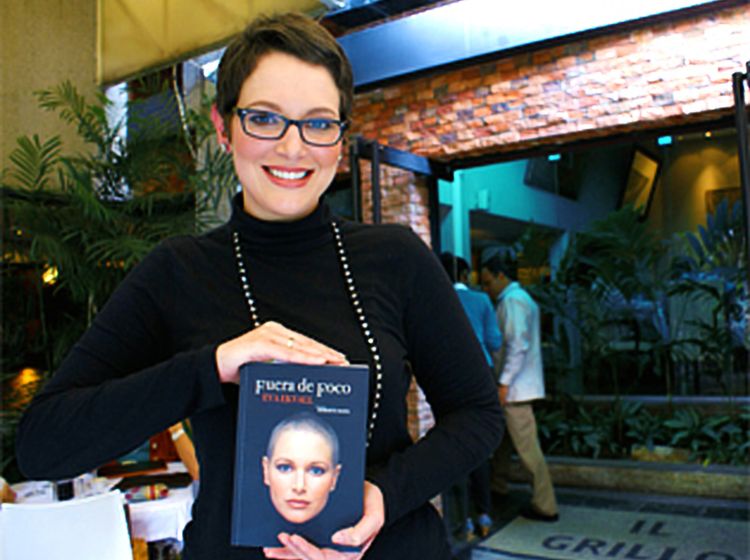 Bald hair, pale complexion due to the loss of both eyebrows and eyelashes, the image of Miss Venezuela 2000 when she curled up in the bed with two breasts soreness that shocked people in “the power of beauty”.

Eva Ekvall was crowned Miss Venezuela in 2000. One year later, she attended the Miss Universe and won the third runner-up. Eva became a famous TV host in her hometown. In February 2010, this beauty was diagnosed with breast cancer.

Eva Ekvall had just been crowned

Recalling her horrible days, Eva said, “At first, I felt my breasts swell. I thought I was pregnant and it was a normal body transformation of a pregnant woman. Therefore, when I was diagnosed with cancer, I was furious. I was angry at myself because I could not find out the disease sooner. Because my aunty had cancer twice. Also, my grandmother died of this disease but I let time useless”.

“When the pain came, my chest ached. I did not want to keep them. I no longer like them, I hate them. I wanted to cut them off. Even if I had a scar, I felt more comfortable, ” Eva said.

Eva Ekvall during the treatment

Ten years ago, in order to conquer the beauty queen, Eva had undergone much cosmetic surgery including breast augmentation. After suffering from cancer, she realized a paradox that: “In a country where women pump up breast every day, people discriminate against people with breast cancer, some people did not have enough courage to pursue the treatment of the disease, “Eva commented.

But Eva overcame her initial sense of shame to undergo eight months of chemotherapy and radiotherapy. She was fortunate to receive great encouragement from her family, especially her husband and daughter.

In addition, a photographer named Roberto Mata persuaded Eva to write a book about her story, and allow him to take her photographs during the treatment. In a country where few women do not wear make-up like Venezuela, this seems to be the “impossible” proposal for a Miss like Eva.

“At first, I did not dare, because I did not know if I was pretty anymore. But then, I no longer cared about beauty. I knew that I was suffering from cancer, ” the beauty said.

Along with the treatment, after eight months, she completed a book called Fuera de Foco describing the healing process and publishing the photos of Roberto Mata.

The cover of her autobiography

“The pictures looked horrible, because no one had seen me in such a state. No one saw me bald, no makeup. It hurt to look at myself in the mirror. My face swelled up. My hair felt out a lot, then my eyebrows, my eyelashes. I looked like a monster, ugly “.

At the launch date of the book, Eva’s hair grew back, she was more irresistible. However, cancer was still like an obsessive obsession with this 28-year-old beauty. “It can come back. It is the fear that any cancer patient will suffer for the rest of his life, “she said.