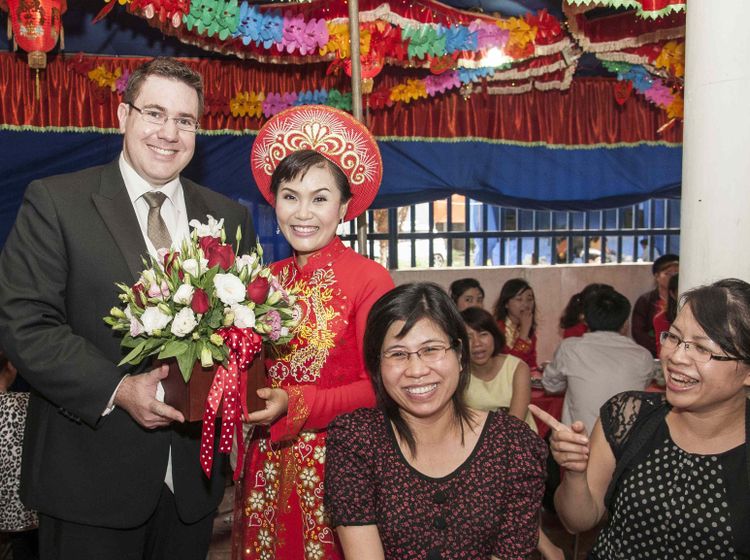 What made me so depressed and pensive the most at the time was that my wedding day wasn’t far off. Why had the disease chosen me at that moment in time to afflict me? I was looking forward to the day that I would marry the man of my life after nearly four years of love in the distance.

My disease was a long story. It took more than two months, through many tests and examinations at three different hospitals in Hanoi. I was just diagnosed with breast cancer. The first symptom of my body was a small swell, slightly painful around the mid-arm; the very rare sign that you have breast cancer.

For more than two months with the suspicion of no answers, my emotions were conflicted, sometimes full of hope that I was okay, and sometimes brimming with fear and panic because of an underlying bad feeling.

The day I received the diagnosis was something I would probably never forget. It was Vietnamese women’s day 20/10/2012. I was diagnosed with ductal carcinoma at K hospital in Hanoi and It was disclosed later than 5 pm. The woman who was with me was a colleague at the university. She was the breast cancer patient who tested with me that day. She and I both received unexpected results. I didn’t cry, held the results and quietly left the hospital.

What made me so depressed and pensive the most was that my wedding day wasn’t far off. Why had the disease chosen me at that moment in time to afflict me? I was looking forward to the day that I would marry the man of my life after nearly four years of love in the distance. I didn’t know what was best for me, for my lover and for those who loved me. Honestly, the time to plan and think about my wedding was my happiest time ever. I used to dream and believe that my life would turn over to a beautiful page after I got married.

When I was calmer, I faced another difficulty – and that was I didn’t have enough information to decide how to start treatment. Maybe I missed my opportunity to spend time looking for information, referencing many sources before making a decision. However, I believe that life and health are my most precious assets. My doctor and I would fight against (deleted(1)) cancer. I didn’t want doctors taking all the responsibility for the risks on his side, so I didn’t give all my decisions in my treatment for them.

Now, I am following the guideline for hormone therapy and chemical injection for bone regeneration. I have not undergone whole body chemotherapy and hair loss, so I haven’t undergone much of a change in appearance. I also don’t recognize many spiritual changes. There are things I have known about cancer but don’t really understand. When I finally contracted the disease, I became more aware of that. The simplest example is that I know that nothing is more precious than health and time, but sometimes I don’t realize the importance of them. Now I’ve come to realize and regret the choices I made.

I have an aunt whose dad’s sister also has breast cancer. Her husband was an alcoholic and died of cancer leaving her with two children. She is always working hard to care for the children. It is (deleted(1)) piteous to think that she is less communicative and thoroughly selfless, thinking nothing of herself.

Vietnam lacks oncologists which lead to patients (deleted(1)) overcrowded, so the time spent on patients is very few. When I go see to the doctor, I always seem to be rushed to think and act fast. Whatever we have to do, we have to do quickly. Whatever we want to ask, we have to ask quickly so we don’t become a hindrance towards the other patients. We’re scared that maybe the doctors are already concerned with other matters, or that we’ll get scolded.

The first thing I do is find out the process of examinations, treatment, and payment of hospital fees to less pressure the doctors, nurses and make it less hard for myself when I go to the hospital. The next step is to record any concerns, questions, symptoms, abnormalities that occur during the treatment to tell my doctor clearly, coherently and briefly my worries.

I also want to encourage cancer patients like me one thing – you have the right to ask the doctor what you don’t understand, what you want to know about your illness. It doesn’t matter If the doctor says you are stupid. Doctors have had (deleted(1)) dozens of years’ worth of learning to understand about the diseases. It is not surprising If a non-medical person asks silly or absurd questions. Your life is yours.

I am lucky to have a husband who loves and accompanies me alongside on the hardest path of my life. I used to have the confidence to think that the hardest times of my life were over. Assuming the difficulties came again, it would be easier to overcome. I could have never imagined this challenge was too great. Without my husband, family, friends, colleagues and the community, I could’ve been defeated by cancer. Their love gave me the strength to fight the countless difficulties that still wait for me.

I just discovered a second malignant tumour and underwent surgery again in late August 2013. Unfortunately, the second malignancy is another form of breast cancer that is unlike the cancer of the first surgery. I will be soon receiving whole body chemotherapy. After that, I want to have the third operation to remove the whole breast. Because I have a strong hunch that my other breast will also get cancer cells but won’t show through the tests. I hope that after the removal of the breast I will have more time to live with my lover and do what I desire to do for myself, for the Breast Cancer Network of Vietnam.