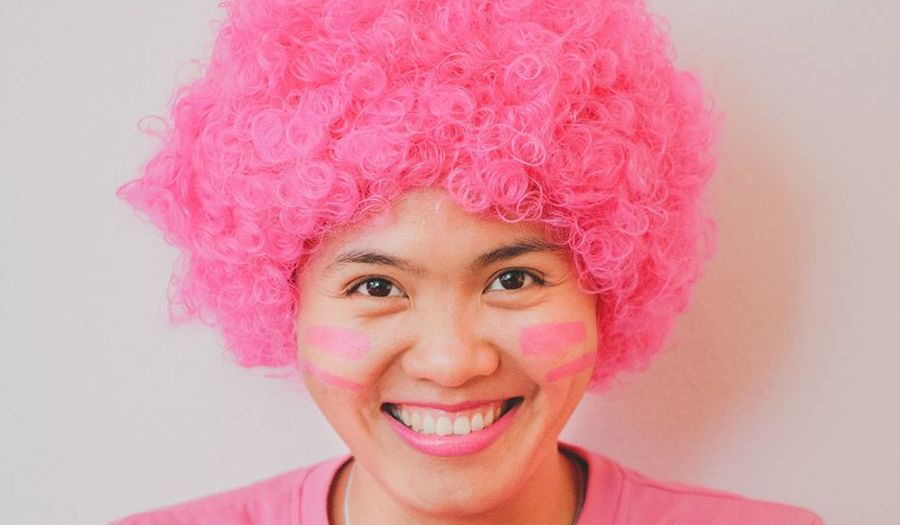 The Girl Who Recoloured Her Life Pink

The “Woman Combatant” or “Super Leader” are nicknames people have used to call Thuy Tien Nguyen (born in 1988), the girl who gave up her dream to pursue the struggle against breast cancer by the Breast Cancer Network Vietnam.

Graduate of the law course in Da Lat University, Thuy Tien was the same as many other of her student peers; they all had a dream job. She was also the assistant director of a foreign hotel.

While highly engrossed in her job, Thuy Tien had been informed that her elder sister was diagnosed with breast cancer at the end of 2012. She decided to leave Da Lat, with the intention of setting up a business in Hanoi in order to take care of her.

“When I found out that my sister had been diagnosed with breast cancer, it quickly became the most terrible moment in my life. I kept asking myself how long she would stay alive, and how I would cope with the losses,” said Tien.

Nevertheless, Tien was emotionally moved and determined by the confidence and optimism of her sister.  Moreover, she had also been inspired to deeply research information relating to the pernicious disease.

Prior to establishing the project, Thuy Tien and her sister organized large strategies, such as “Conquering the fear” (10,2013) and “Stronger in the face of fear” (10, 2014), and held many workshops that attracted and were supported by many different groups of participants. The network also established the artificial hair library, a method of utilising cotton wool as artificial breasts for patients. They were able to borrow as much as they needed, completely free of charge, during the valence treatment. While the project was developing, the leader, a strong girl named Nguyen Khanh Thuong, had gone. All of the worries had been put on Tien. She asked herself “what should I do” when the leader of the project had gone. However, with heart and the decisiveness, Thuy Tien stood up and undertook her sister’s job.

“Somebody once told me that if I were not to do anything, a day would come where the people would forget Thuong. I was so pained when I heard those words” Tien shared.

“ You always have the choice to make yourself the most beautiful.”

Thuy Tien could not forget the lonely feeling while she was doing the project alone.  Each activity in the project needed a budget. To increasing the amount, she took extra jobs at home until the strategies were successful. Only then did she breathe a sign of relief.

However, the success has also provoked negativity, to which she ignored, criticisms of the purpose of her job. But Thuy Tien persevered with the strength to continue, fuelled by the smiles of the faces of her patients.

“So many people say that I am doing this job because of the money and reputation. However, everything that I do stems from the love for my sister”.

To the present day, the Breast Cancer Network remains strong after 3 years of development. Thuy Tien has been proud to a great extent at the many things that she has done for breast cancer patients. It is the optimism with life

Tien said, “I think the greatest thing that the Breast Cancer Network brings back is how the patient always feel optimism and the life full of pink”.

“The message I want to give to everyone is no matter what people think the most important is what you think.  Even in case of disease could make your body change, you still have right to choose to make yourself become most beautiful as much as you think about”.